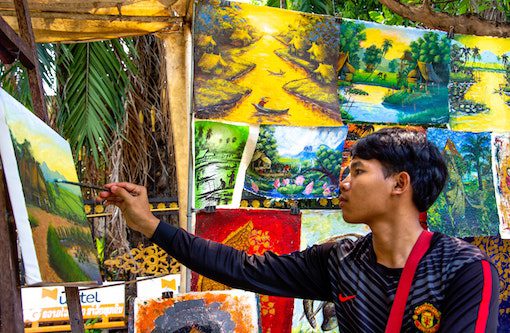 Surely focusing all our attention on what we’re doing is a good thing. Getting those dishes clean, hitting that nail in straight, finding that spelling mistake, these all need good attention to detail.

At our meditation retreat center, for example, we try to notice when we lose concentration and why. We’re looking for patterns. It’s not just something we practice on the meditation cushion. During our karma yoga meditation time (service, or active mindfulness meditation), we aim to build and keep concentration and not follow our random thoughts or feelings instead. Deep concentration leads to absorption and then bliss. Bliss leads to joy, good states, and insights. Yay!

Yet, what might we be missing with one-pointed concentration?

Do you ever focus so hard that someone has to call your name three times to get your attention? Sometimes we concentrate hard to block out distractions in a busy place, or when we’re in a creative bubble. And let’s be honest, we might also block out other things because we don’t want to be bugged, or because we’re protecting our space or energy. Being mindful is also about seeing our habits in play and creating space to make different choices. Why? Because if we lead only with our tendencies or preferences, we take away from being awake to the moment, which blocks us from clear views, and friendliness or compassion to others.

And there’s the practical aspect. Like elsewhere, at a meditation retreat center there’s more going on than the one thing we’re focused on. What if we were so busy “mindfully” working that we forgot to make lunch for someone in a cabin on one of our meditation packages? Along with concentration, we also need peripheral awareness. (You can learn to increase both on our Three Month Intensive Program, and gain tools to integrate mindfulness into your whole life.)

What is awareness, then? Think of concentration as being at one end of the attention scale-a pointed focus that lets in nothing else, for whatever reason. And at the other end of the scale, imagine noticing everything around you, such as what’s in the room, temperature and sounds, who’s there and how you’re affecting them, or what they need. You’re more likely to see what’s happening and what’s needed on a wider scale. And of course, such a wide focus may affect your concentration on one particular thing. 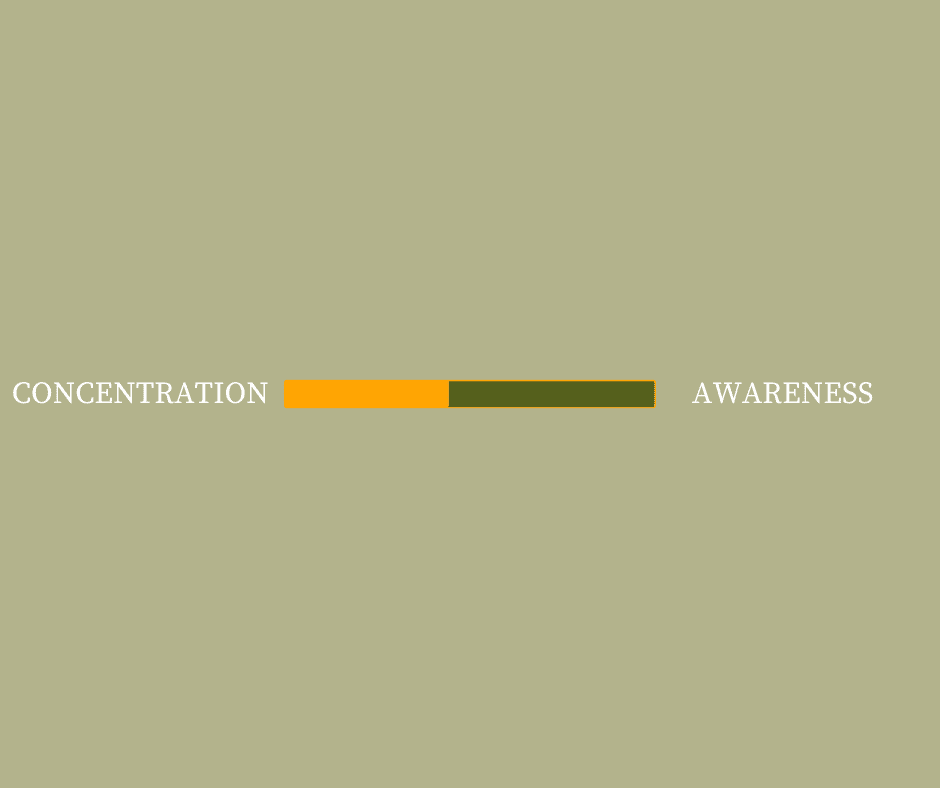 We all have a proclivity or preference somewhere on the scale, which is natural. Part of mindfulness is to see where all our preferences lie, because this is where we’re essentially asleep.

How about an example of a proclivity to concentration over peripheral awareness, and how it was not working for me as well as I thought?

If I keep focused, I’ll be happy!

It was during a golf game that one of Clear Sky’s founding teachers, Qapel, saw the opportunity to show me how I value concentration over awareness.

Seeing that I was totally absorbed in my own game, he gave me the challenge to count the other three players’ shots throughout the game. (For someone else, a challenge might have been to concentrate more on their shots).

Maybe that doesn’t sound hard to you. But to do this, I had to let go of my deep desire to hit good shots myself by blocking out everything else. Instead, I had to look around me constantly and de-prioritize my game.

Why did it truly bug me? Because in sports I fall into in my natural introverted sensing realm, happily blocking out everything else, and I base my enjoyment on the feeling of hitting an excellent shot.

In fact, that challenge was a hugely important lesson for me, and I knew that even then. Yet, somehow, I still wanted to concentrate on “my game” more.

That’s the thing with challenging our preferences – it interrupts, well, you. And that’s where the freedom lies.

The freedom of a new perspective

Then something beautiful happened. As I let go of my performance, which got considerably worse, other things grabbed my attention. I focused out more.

First, I noticed Martin getting frustrated and being over-absorbed in his own game, just like me. It was like a mirror to what I do.
Then I saw that the newer player, Stephen, wasn’t having much fun at all. It reminded me how frustrating it can be as a learner, when you’re mis-hitting every other ball.

And, most importantly, I noticed that my teacher, Qapel – then 63 – was getting tired in the summer heat. Yet, I’d been in my little world, doing nothing to support him. And he was the whole reason we were there!

Suddenly, my interest shifted to making sure my teacher was drinking enough water and to helping him save energy, by picking up his ball or clubs whenever I could.

I made a point of offering Stephen tips and encouragement. I engaged with Martin rather than leaving him to focus only on his game.

With this shift of one-pointed concentration to awareness of what else was going on, I felt more engaged in the entire experience. It felt way more generous and fruitful than thinking I needed to focus so hard to enjoy the game. Go figure, the joy wasn’t in whether my ball went straight. It felt better to share the joy of when someone else’s ball went straight.

Since then I’ve realised that full concentration is sometimes useful and other times a hindrance.

If this sounds like you, here are some things you could try: 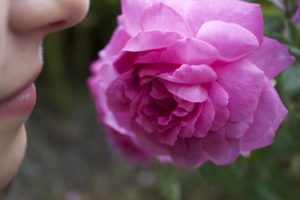 There are lots of situations – like when writing or editing these posts – where full concentration helps me. And I continue to notice more times where I’m overly focused and lose the balance that comes with having a wider awareness, too. Just yesterday, while rushing to cover our cars in a sudden hailstorm, I paused to point out a huge, vivid rainbow for my neighbor. Did he stop caring about his car for a moment? No. But perhaps some part of him will stop to see the rainbow next time.

After all, even though concentration works for us in many places, we don’t want to block out those rainbow moments. Or think we can’t also stop and smell the roses.

Concentration and awareness tend to lead us to better states. Read a blog about what consititutes a good state, anyway?

Interested in learning to integrate mindfulness into your life? Our signature course starts Sept 11 with live, interactive classes, recordings and extra meditations. Join us!

One thought on “Concentration vs Awareness”