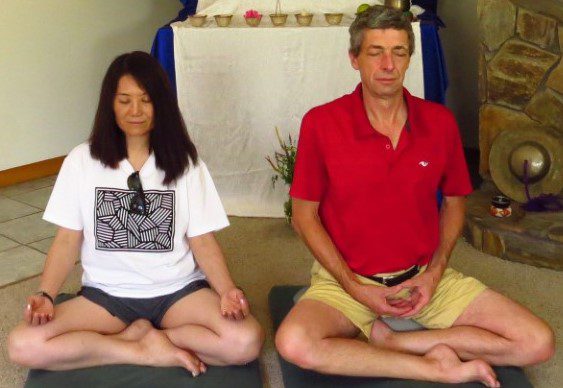 When I first started meditating, it felt great. I’d had a little instruction and I started sitting at home, alone, every morning.

The fact was, I knew my initial enthusiasm would start to subside. Then I’d stop and regret it, something I’d done over and over, with many interests.

Because I knew it mattered so much, I took a leap of faith–I booked my first retreat, several months in advance. I wanted to have that commitment even if I stopped meditating in the meantime.

This is a short story. Jump down below to get the three ways to keep your meditation practice going

By a few weeks before that retreat, I had indeed pretty much stopped meditating. Yet, the flight was booked and they were expecting me–there was no question in my mind of backing out.

When I arrived in Thailand, I can honestly say it was a life-changing experience. My practice earlier in the year was apparent to the teacher and this boosted my confidence hugely.

Most importantly, I had done something to support the aspiration and keep my practice going.

For the same reason, when I came back from Thailand I looked for a group to meditate with.

The universe will support your aspiration

The first group I found didn’t resonate. So after a few events with them, I kept looking. From a classified ad, I knew that a man called John Munroe offered a meditation class on Tuesdays. So far, though, I hadn’t been able to go because I almost always worked on Tuesday evenings.

The next chance I had, I went to his class, aware that I might not be able to go again for several months. Two things happened there. First, I resonated with a truth I’d never experienced before. This man was connected to something I wanted. And second, he announced that, after a few years of teaching only on Tuesdays, he would start teaching on Fridays, too-the following week.

With John’s Friday class, I found an oasis that supported my practice through the week. I learned that this trip across Tokyo after a week of work was worth it–it created space and energy in my mind, so I could more easily carry mindfulness through the week.

Six months later, I took a pay cut to block off my Tuesday evenings, so I could go twice a week. I was immediately offered more part-time work that more than made up the difference. I figured the universe was telling me this was a good move!

So, if you’re starting up a practice or struggling to keep one going, here are three things that just might help:

Taking the step of reserving a retreat in advance gave me confidence that I’d follow through.

If money is an issue, you might be able to pay a deposit. Then budget yourself each month to cover the rest.

It’s easier with others. I found it super helpful to have a time every week when I knew a meditation is going to happen. Now, I live in a community house that offers this to others.

There are all kinds of folks out there. So don’t be discouraged if the first group you meet doesn’t resonate.

You don’t have to be a teacher to offer your space. Sitting together–opening and closing with a simple prayer or ritual–is mutually supportive. I know some people who like to read a passage from a text at their weekly group sit. Or you could have a small group reflection session before or after.

Honor that space – of course making sure it’s clean and conducive to clear, good states of mind. Hold a space with clear guidelines of how the session will go from arrival to departure.

And if you’re considering a retreat, Clear Sky’s personal cabin retreats are designed to give you a balanced of formal practice time and mindful activity.

One thought on “Three ways to keep your meditation practice going”