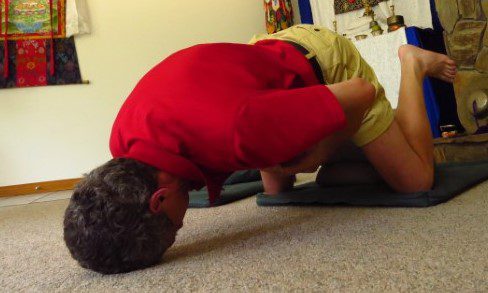 I would love to sit comfortably in lotus position

I’ve always considered myself a lousy meditator (although that’s not me pictured above!). From the time I stumbled into my first Dharma class decades ago, I’ve struggled to find stillness of body or mind while sitting.

Not that sitting still is the only way to meditate, yet traditionally, it is at the core of the process. These days, though, I’d settle for cross legged, only my knee or hip has a tendency to quickly protest. So I alternate from this to chairs, as my body demands.

I’ve tried walking meditations, too. I’m not sure why, but either I lose track of counting my steps or I hear traffic or voices, and my concentration collapses. Even when I can stay focused, there’s often a background nervous energy vibration that distracts me from relaxing as deeply as others seem to.

The path is not just meditation, of course. The Teachings (the Dharma) I get. There’s lots there to satisfy my intellect and I understand how valuable Dharma is for the well being of all. And although I could always embrace the Teaching intellectually, I just wasn’t settling in my body as I attempted the formal practice.

So, while others seemed able to meditate peacefully and emerge shiny and awake, my experience of formal practice has often been one of misery and frustration. I’ve felt discouraged by my lack of progress and wondered whether I’ll ever “get it.”

Now, I had heard of Karma Yoga and I knew the meanings of the words “action” and “integration”, but I had never put the two ideas together as a worthy pursuit in its own right.

Then, when the Clear Sky community initiated a program actually called “Karma Yoga,” I took a closer look. To my surprise I discovered a whole new way of experiencing Dharma. Finally, I had an outlet for my overheated personal energy and somewhere that my skill set was of great value – for the practical functioning of a center like Clear Sky. Just thinking about it, I began to feel good about myself again.

That was several years ago. Since then, I’ve been a fixture at Clear Sky, as the point person overseeing and maintaining land and buildings. I’ve learned so much about human relations and community living through daily interaction with our teachers, resident community, and the seekers who have participated in the Karma Yoga program, many of whom have returned to become fully engaged Clear Sky members. I’ve found exhilaration in my “retirement” of holding such a space and working with others for the greater good, at both the physical and administrative levels. It has contributed to my becoming more relaxed, buoyant, happy, and present.

And here’s the thing. Almost as a by-product, my body has become comfortable during formal practice.

My breathing is deeper, my concentration sharper, the bliss quotient way up. Daily practice has become something to look forward to. Perhaps more than anything, being a Karma Yogi has made it easier to be in my skin, just as I am at any moment, accepting of conditions as they are, seeing clearly what still needs work.

This all speaks to a big area of my life, because I seem to need to burn off a certain amount of energy every day. Karma Yoga allows me to use that energy in creative and constructive ways that keep me happy, renewed, and tuned into the appreciative feedback of those I’m working with. In short, it makes me and everyone around me feel good.

Purely and simply, the energy available is a multiple of what it would be if I was just doing it for myself. Merit folds back on itself, the sender receives many times over like a series of echoes rebounding.

I’ve recently been on some explorations away from Clear Sky in a short sabbatical. I’ve seen a lot of interesting things and met a lot of interesting people. Now I’m looking forward to returning to rejoin this amazing tribe of spiritual warriors in building a refuge for future seekers of growth and unfolding