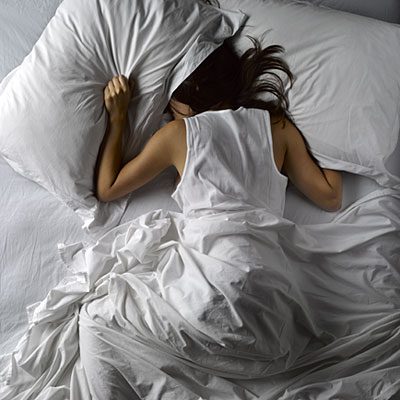 Suddenly I was wide awake.

With dread, I looked over at the clock on the nightstand, hoping I wouldn’t see what I knew I would…1:30 a.m.! I’d been asleep for less than three hours, and if this night was like all the nights of the past six months, it meant I was awake for the rest of the night.

It wasn’t always like this. I used to be a sound sleeper. Once I fell asleep, I could sleep for eight hours, waking without an alarm at the same time each morning. But that was before I went through a separation, among a few other major and traumatic life changes.

As is true for many people, the stress of these changes affected my sleep and I developed a sleep disorder. Now, I would wake early in the night and not fall asleep again until I got up for work. Or, I would wake repeatedly throughout the night, only getting four or five hours of broken sleep all night.

As this went on, week after week, I began to dread falling asleep, fearing that in a few hours I would be awake in the dark with my mind and body tossing and turning. I was becoming increasingly exhausted, unable to concentrate at home or at work, and emotionally sliding into a dark and depressive hole.

But now, six months later, that nightmare is over. What happened that allowed this change to occur?

The main thing that changed was an overall shift in the way I honored the space I was in. Now, you might wonder exactly what that means. To better explain it, I’ve broken it down into four things that changed how I viewed and responded to my situation.

Number One – What’s so bad about being awake? My teachers suggested I re-evaluate what it meant to be awake at night. If I accepted being awake as what was happening and didn’t fight it, I could allow myself to say, “Well, I’m awake again, just allow yourself to be here”. If I couldn’t change it, I could learn to accept it. I didn’t have to like it, but I could also choose not to fear or fight it. Besides, on a different occasion if I was offered a chance to lie in bed for hours with nothing to do, I would have thought that was a real treat

Number Two – Don’t just lie there, do something! I deliberately focused my awareness on something else, other than not sleeping and the rats-nest of worrisome thoughts that would flood my mind as I lay awake. As a meditation practitioner, I used this time to focus on my breath, or do prayers, or notice with detachment the variety of thoughts, emotions, and sensations that arose in the hours that I was lying in the dark.

Through the meditative focus, I began to notice a predictable pattern. Firstly, although I would wake suddenly, the worry and thoughts weren’t present immediately. They only began a few seconds after I was awake. This gave me the insight that the arising of worry had become a habitual response to being awake in the night.

I also noticed that certain physical sensations occurred at a predictable time in the night. A wave of unexplained dread passing through the body?…it must be around 4 a.m. again!

Similarly, I noticed a flow to the thoughts and the accompanying emotions. Worry about money led to worry about my adult children’s future which led to feeling like a failure as father. With these kind of repetitive worrisome thoughts, no wonder it was hard to relax into sleep.

Not surprisingly though, as I got better at being aware of the patterns and then deliberately shifting my awareness away from worry, the worry decreased, and I would fall back to sleep easier.

Number Three – Be comfy and cosy. I took steps to make the environment as supportive of sleep as possible. I started using earplugs to shut out noise in the house. I wore blinders. I began taking a hot water bottle to bed, as I found the warmth against my chest comforting and soothing. And after talking to my doctor, I opted to have a short trial of a sleep aid, to help me reset my sleep cycle. 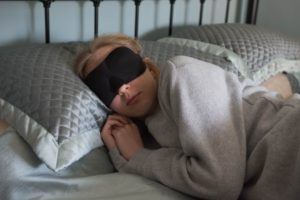 Number Four – How much sleep do I really need? I made another shift in my view of the situation. Even though I wanted to have 6 or 7 hours of sleep, I found that I could function well enough with 5 hours of sleep. I could relax in the knowledge that I didn’t need what I thought was a ‘full night’s sleep’ in order to do well at work and in life. In fact, as my meditation practice became stronger I realized that I didn’t need 7 or 8 hours of sleep anymore. The anxiety I felt before falling asleep began to diminish, because I knew I would likely get enough sleep even if I did wake early.

Honoring the different kinds of space

Another way I look at this experience of living with insomnia is by breaking it down into three different kinds of spaces:

I honoured the physical space by making it more conducive to sleep. I honoured my internal space by observing the flow of thoughts, sensations and emotions without judgment. And lastly, I honoured my conceptual space by changing the way of looking at the situation so that it didn’t foster dread or anxiety.

Honoring our space is one of of Clear Sky’s principles for the creation of a container that supports our spiritual growth. Taking a step back and applying this principle to my sleep problem helped me to regain a healthy sleep pattern, and in the process I learned a lot about myself, my patterns, and the nature of my mind.